Made by Humans, for Humans.

We'll explore Cylon's architecture, from the top down.

The Master Control Program is responsible for coordinating everything else inside Cylon. It manages adding new Robots, and starting/stopping both Robots and the API.

It is also used to set and fetch configuration for Cylon internals.

The MCP's relation to other components of the system can be seen here: 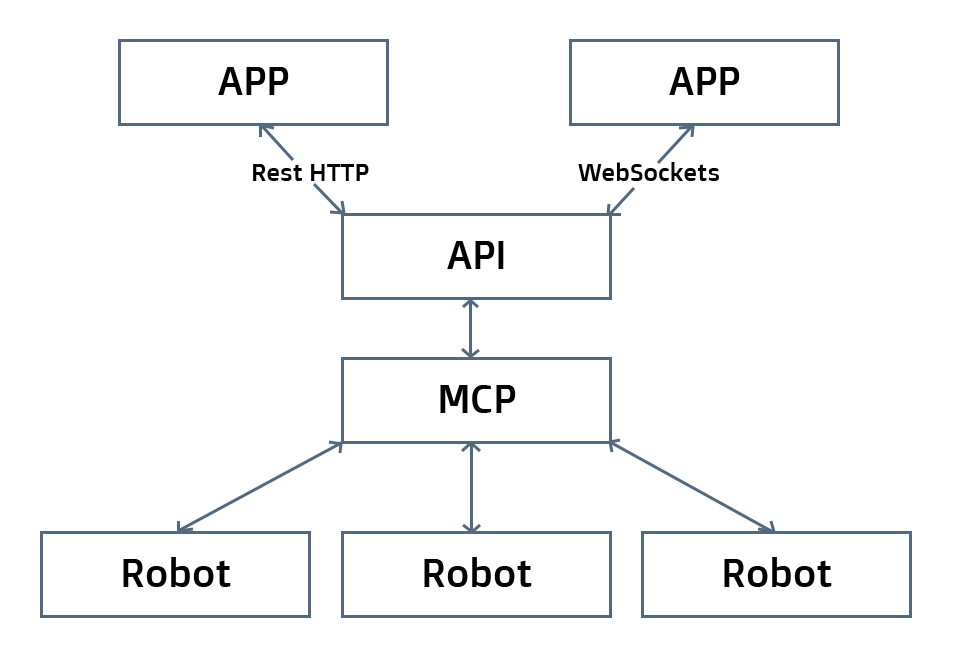 Cylon.js uses a simple plug-in system for API modules. This gives several advantages, like a smaller file size for the base cylon module if you do not need the API. It also allows you to only use the interfaces you actually need.

For example, the cylon-api-http plugin offers a RESTful HTTP interface, along with server-sent events that can be used to subscribe to device events.

Another API plugin cylon-api-socketio supports an interface for clients based on the popular socket.io module.

All API plugins interface directly with the MCP to fetch robots and information about them. They are also capable of executing commands on Robots and Devices.

A Cylon robot is a collection of devices and connections, with the necessary glue to allow them to coordinate together. A User will instantiate one or more robots through the MCP, and either start them all simultaneously or individually. Robots can also have custom commands (to coordinate multiple devices/connections) and can communicate with each other through the MCP.

Devices and Connections are an abstraction layer over drivers and adaptors, respectively. These allow for a layer of indirection between Drivers/Adaptors and the Robot itself, and ensure the interfaces can remain consistent.

Drivers and Adaptors are the meat of Cylon, and allow Cylon to communicate with devices and services, and issue commands/receive events from them. These are implemented as part of Cylon submodules (cylon-sphero, etc), and are platform specific.

Adaptors are in charge of connecting to platforms, no matter the medium. For example, the cylon-sphero Adaptor class communicates over Bluetooth, while the cylon-leapmotion Adaptor talks to a WebSocket server.

The Adaptor classes ensure that the Drivers are able to directly communicate with the connected platform.

Drivers, meanwhile, are used to issue commands and handle events for platforms. For example, a Servo driver knows all the necessary commands to tell a Servo to turn to a certain angle. The Driver has no knowledge of how to connect to the Servo, it trusts the Adaptor to do that and have a consistent interface.

Due to the abstraction level provided by Devices and Connections, adding new hardware support for Cylon is as easy as writing a basic NPM module with Cylon as a dependency. For more information about writing new Cylon modules, check out our documentation on Adding New Hardware Support.

Cylon.js provides a simple, yet powerful way to create solutions that incorporate multiple, different hardware devices at the same time.

Want to use Ruby on robots? Check out our sister project Artoo

Want to use the Go programming language to power your robots? Check out our sister project Gobot